Hello, hello everyone! Where has the summer gone I wonder, here we are, in September already....
As many of you know, this time round we are showing you creations with the wonderful Chocolate Barque Steampunk stamps, the Steampunk Travel Plate. I hope most of you will have seen all the wonderful projects created this month already, and if not, make sure you have a look before leaving.
I will be showing you two projects this month,  both under the theme of "Steampunk with a Feminine Twist". Both projects belong together. I'm showing the first one today and the second on Thursday, so I hope you'll come back. 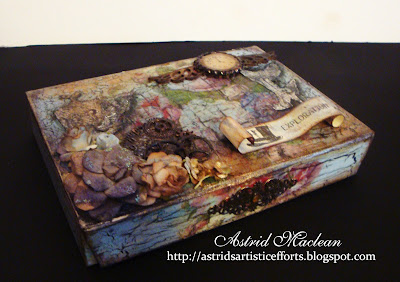 I decided to alter a box that was a gift given to me by my friend Zuzu It started life looking like this: 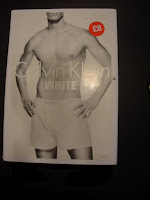 Very sexy I know, but the real reason I love this type of box is because it has a really strong magnetic closure, is very sturdy and really fun to alter. This is how I went about it: First I painted it inside and out with Espresso Paintdabber.  Once dry I painted it with crackle medium from my stash and when that was dry to the touch I added a second layer of paint, this time Cloudy Blue Dabber. The background pattern was then created with the help of the very thin top layer from a paper serviette. Finally I inked the edges with  Timber Brown Stazon and Inka Gold.
The inside of the box was lined with paper from my stash 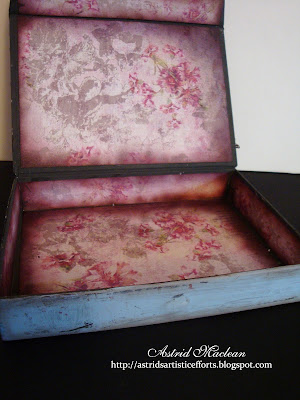 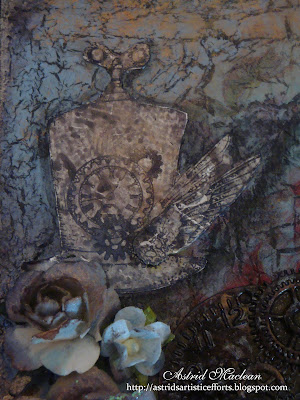 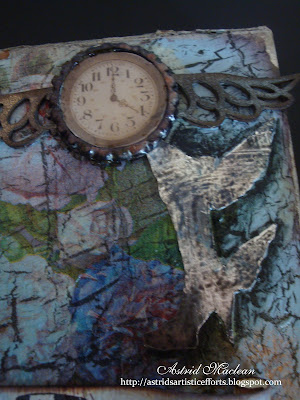 I took a piece of silver miri card, dabbed a black dabber all over it and wiped most of it off again with a piece of kitchen roll. I then sprayed it with 3 colours of Cosmic Shimmer Mist, Ancient Copper, Patina and Bronze Blush, these last two belong to the Vintage range of colours. When dry I stamped two of the stamps from the set with black Stazon, cut them out and adhered them to the box. 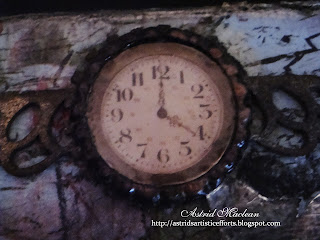 The watch with wings is part of the Tando Creative Steampunk Wings and Cogs set, sprayed with the mists again. I also added a bottle cap from my stash. The clock was cut out of one of the papers from the Kaisercrafts Timeless Collection which I covered with Glossy Accents.
I further embellished with some of the Tim Holtz Idea-ology Sprocket Gears and the Clock Face from Snazzys Steampunk Supplies and finally some flowers from my stash. Because the box has the magnetic closure all I needed to do to to finish it was to add a charm to the side. The sentiment is from the Darkroom Door Steampunk set 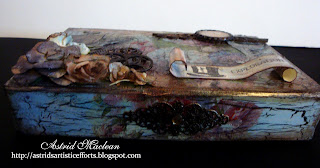 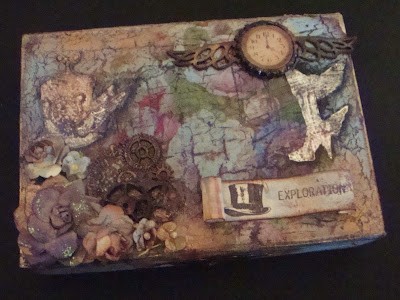 The very last step was to seal it all with a good coat of Mod Podge Matte.
Well that's it for just now; if you want to know what I am going to keep inside the box, you'll just have to come back on Thursday to see another Steampunk project with a feminine twist. Hope to see you then!

The Steampunk Locomotive by Hels

Gooooooodly Morning Snazzyfans! I don't know about you but I do love a smidge of steampunk - ok, I admit, I am totes-addicted to all things steampunkery so when I received my DT package for August (many thank-you's to Val & Don for their fab choices btw) I was chuffty-tuffty. The rest of the girlies have been busy making all their steampunk creations so if you haven't had a chance to look at them yet, please do scroll back thru the month so you can be inspired! 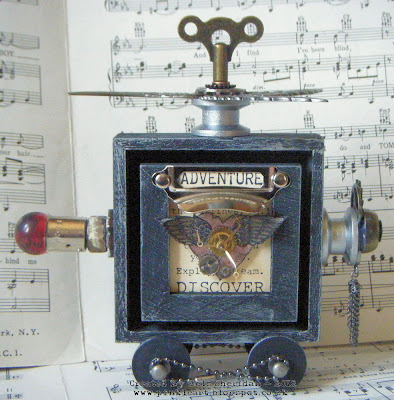 The first week of the month saw us offering a challenge and we all made a little something with the Chocolate Baroque stamps and goodies we had been given. I made a 6" shadowbox and whilst making that I came up with an idea for my main project. I have this old chipboard house and I was planning to add some cogs and gears to the roof and make it a bit steampunky. When I finally found the chipboard house (yep, several hours rummaging ensued before that saw the light of day again) I was dead disappointed. It was just so wrong, the height, the size, the whole thing! Funny how our memories change the way something looks isn't it? Anyways. Whilst doing said rummage, I found a mini shadowbox that is about 3 1/2" square. That set the cogs whirring (haha, steampunk reference there lol) And then the cogs whirred some more.... and gradually the little shadowbox evolved into ... The Steampunk Locomotive. 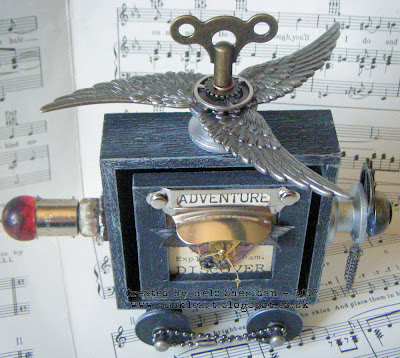 You might not know this but I do love trains - comes from driving them for 10 years I reckon. Well, this little box was being transformed into a vehicle, the cotton bobbins making perfect wheels when I had this here brainwave. The Loco needed a form of propulsion! What better than a hooge propeller on the roof? Out came mountboard and a pair of scissors and almost instantly, into the bin they went. Akkk, all wrong. They needed some dimension but also needed to be swooshy. Another rummaging sesh in the box of metal embellies unearthed 3 Idea-ology Wings.... YAY! PERFECT!!!! And of course, if you have a propeller you need a windy thing to make it start to move... so the Idea-ology Clock Key was perfectomundo for this job. Then, when I popped it onto the top of the Loco it looked more than naff! So, another rummage (you should see the state of my room now!) I unearthed more treasure in the form of really old cotton bobbins, like smidgey little ones... and after gluing the propeller to the mini bobbin that I had painted silver just worked. 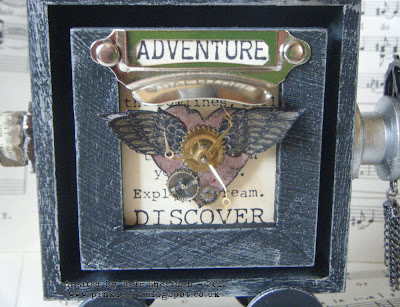 Faced with decorating the inside of the box came next. I had planned to do a mini patchwork inside it... and then spied a little sqaure frame that was lounging about on my desk. I quickly whacked some black paint onto that and popped it into the middle.... perfect fit but it was a bit flat. So, another bobbin was used, gluing it to the back of the box and then to the frame... and the Idea-ology Drawer Pull is actually supposed to be a window-opener (like on a Mark 3 coach) The Chocolate Baroque stamp I used was stamped a few times and layered and then I added watch bits and three ickle watch hands. 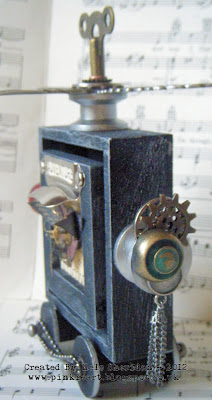 So, that was the Loco more or less finished. But then I decided that it need a buffer on the front (purist railwaywoman remember?) I had a G45 brad so that got stuck to some Idea-ology Gears and then they were stuck to another old bobbin. And of course, a buffer on one end means a tail lamp on the other... so out came a wooden cog, an old but and an Idea-ology Bulb, painted red and aged with black paint. The wheels look ok but.. .they needed something else, so I parted with 4 Hitch Fasteners (they are now discontinued unfortunately) and a bit of Ball Chain... and voila, one Steampunk Loco ready for duty. How I wish I had more of those little shadowboxes because I want to make some coaches for it now! Anyways, if you will indulge me, imagine my little Loco, clonking along, sounding a bit like Ivor the Engine and issuing smoke and steam... 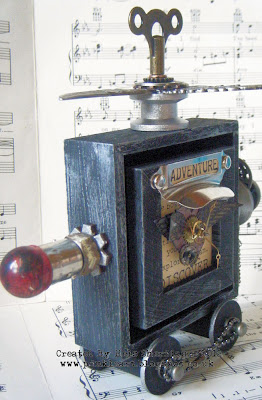 That is all from me for today... don't forget that you can get all the stashly supplies I used from Snazzy's - they have their website nearly complete... all the deets are HERE if you fancy a little peek. Thanks for looking... TTFN!

**Guess what folks, in my excitement to share my Locomotive with you, I inadvertantly wished my life away and blogged a week early!!! I know!!! I reckon that Loco got me time travelling! Anyways, Astrid is showcasing her amazing art this week and I will be back next Monday (10th) with the rest of my projects!**