Chocolate Baroque
Steampunk Travel Stamps
***
Hello Snazzy Folks, Happy Monday to you all.
So the team has had some fun Steampunk inspired items to play with this time round and boy have I had some fun.
Initially I was a little stumped as to what I might do with the stamps but mr mojo had a lightbulb moment and hay presto, this was created. 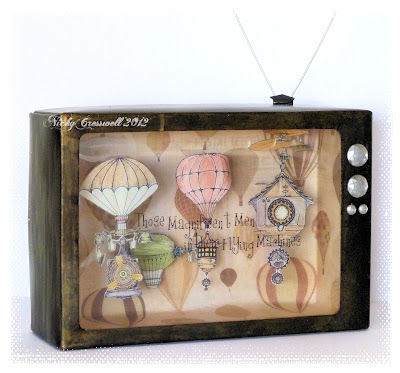 It actually started out as packaging... A gift set of some sort, anyway at the time I looked at it and thought..  hmmmm I can alter that. 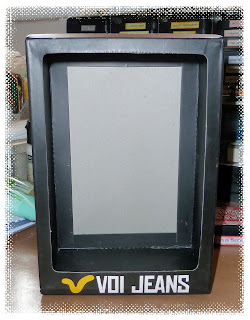 And that's just what I did.  Because one side of the box was slightly thicker I thought it looked like an old fashioned TV on it's side so with a couple coats of studio black gesso and some gold acrylic dabber highlights it was transformed. Oh and not forgetting some round bling gems for knobs.
Then I lined the inside with a sheet of Kaisercraft paper, the box came apart {slide off lid} so it made it fairly easy if not a bit fiddly to do. 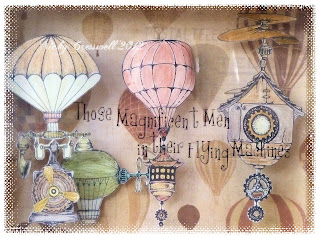 Next came the fun bit. I stamped each of the Chocolate Baroque flying machines in black archival ink onto clearly for art whiteout, and left it to dry overnight.
{I found it needs a longish time to dry so the ink doesn't smear, I tried heating it but as you know the clearly for art stuff is heat moldable and I didn't want any warping before colouring it}
Once the images were dry I coloured with artist pencils as I wanted a nice muted tone to each machine.
Once coloured, I cut them out and attached to the papered base using a strip of clear acrylic packaging {stuff your dies come in} so as not to see it, and make it appear as if the machines are actually floating.
The finishing touch was to print the title of a very famous film on some acetate and stick it to the lid with some ultra clear tape, and add a bit of wire to the top as an aerial.
***
I hope you have enjoyed today's project
I'll be back on Thursday with another steampunk inspired treat
Till Then Stay Inky