hi everyone!! thanks for stopping by and commenting on all the fantastic art work created to hopefully inspire you and yours using the Graphic 45 12 Days of Christmas line.

as promised a draw has been done and the two winners are Maryann Laursen and Ricky LeBlanc. Ladies you have 10 days to send me your addresses and i will be sure to send out your prizes!!

Merry Christmas and a Joyous Happy Holidays to you all!!!
Posted by Diana at 10:30 6 comments:

Email ThisBlogThis!Share to TwitterShare to FacebookShare to Pinterest
Labels: Missusg

graphic 45 scraps & give a way

hi everyone.. here is my last posting from the wonderful design team kit that was sent to me.

as always i have the most difficult time throwing scraps out smaller than a pencil so what did i do with them
well first you cut them up, add a bit of stickles ad you get a tree!! 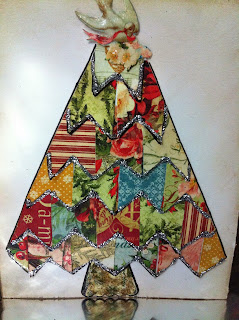 have you run out of scraps.. well no problem how about layering your stamps. i started with stamping the '12 days' in the background with a light archival ink and kept layering ending with "The Twelve Days of Christmas' stamped in black archival ink. oh and to finish it off i add a spritz of glimmer mist in frost. 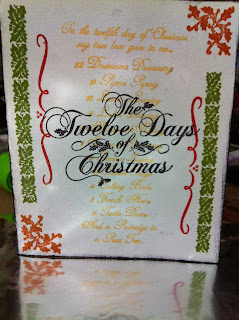 and finally ended with a waterfall card using both paper, stamps and a bit of glossy accents 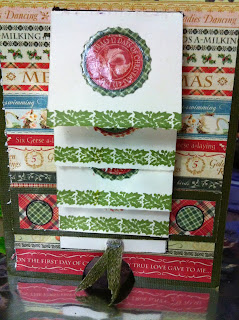 so... have you followed through this week and seen all my winks!!! yes there is indeed a give a way at the end of the tunnel.. how would you like one of your very own Graphic 45 design team paper kits or the set of stamps we all used ... you can see it here!
all you need to do is go back and visit all the design teams posts, leave a comment so we know you were there, and we will do a draw on Christmas Eve for a winner of the paper parcel and a winner of the stamp set!!
i'll chat with you on the 24th!!
diana

hi again. i am back to show you the second project i completed using my graphic 45 papers and embellies.
first i start off with some claudine helmet multi-medium and i attached all my papers to the chipboard 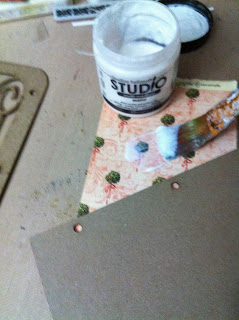 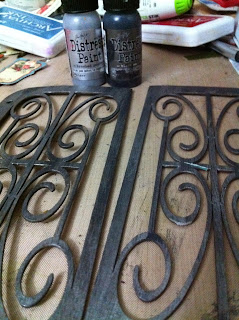 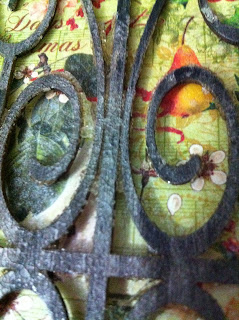 i love how it turned out! 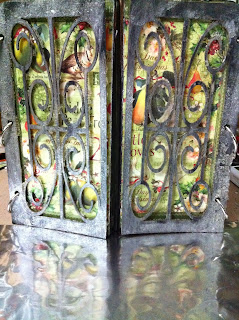 next it was just a matter of assembling the book. i added a bit of shimmer spray to each page to make it pop and more festive. 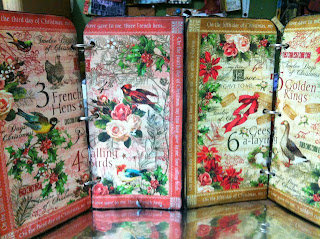 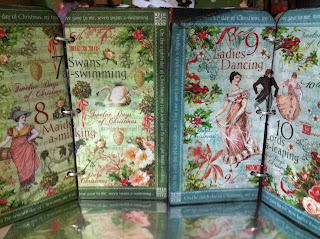 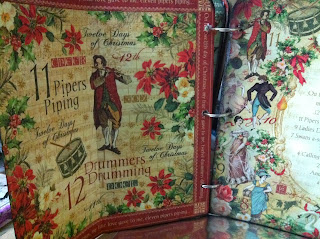 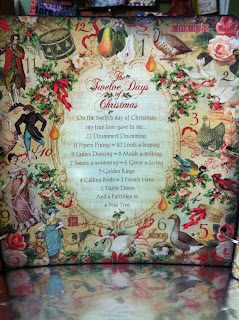 and this is the whole book put together and displayed open on my table. it really shimmers at night by candle light. 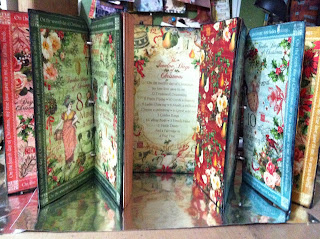 once again, thanks for dropping buy and please do leave a comment and let me know what you think!

i will be back on Friday with my final post showing you what i created with the left overs as well as posting why it is good to leave comments on peoples posts!!! (wink wink)

i have to fully admit that Graphic45 is one of my favourite lines of paper.. not that i use paper because as a rule now a days i don't but i have to say that of ALL the paper lines out there Graphic45 is my favourite by smell alone!!!

so with that said let me get started on the first of three projects that i have completed in the last couple of weeks to share with you.

i am a big believer in using what you have so i started with an empty cheese container, the package of Graphic45 papers, and a pair of scissors (tim holtz scissors but of course!) 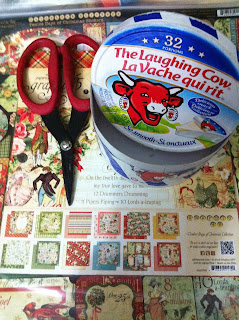 added a bit of glue: 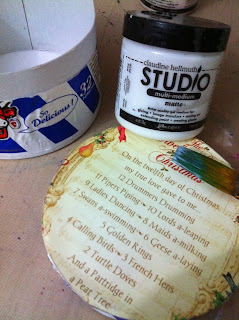 a bit of sanding and a bit of paint: 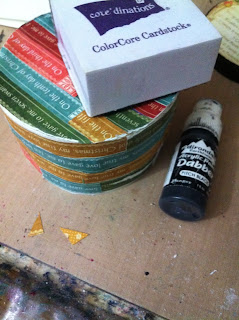 next i mixed a bit of Tim Holtz paint and wendy vecchi embossing paste and using a prima brick mask created the outside of the container... 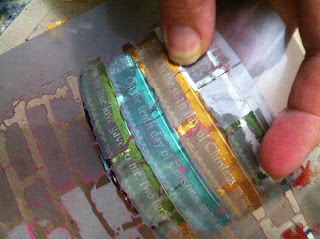 now it was a little too messy (i know!!) for me so added a tad bit of paint to calm it down. 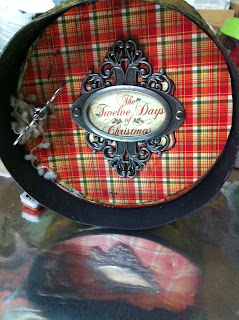 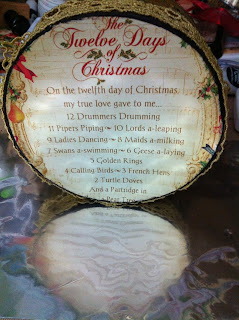 and ended up creating this: 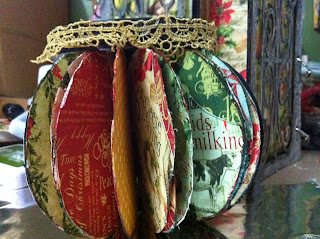 a little mini book inside the once ready for the recycle bin container!! i had so much fun...i wasn't sure what was next but before too long i was creating again...you can see the sneak peak in the background of this photo!!

have you had a chance this month to check out the other design team members to see what they have created...you will want to perhaps leave a comment on each.. just saying...

i will be back on Wednesday!!
diana 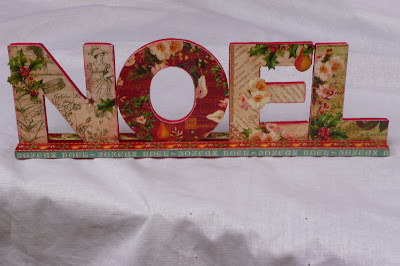 Hi, Lucy here with my second make using the gorgeous Graphic 45 '12 Days of Christmas' kit. For this Noel chipboard word plaque I paid another visit to my local pound store, and Yes, I do live there! It was covered in gingham fabric which you could peel off or leave on. I painted the plaque with red acrylic paint first and then alternated between a plain then a fussier choice of paper from the 8 x 8 pad for each letter, roughly cut them before gluing them on and sanded the edges. I then fussy cut pieces of holly and Christmas roses and pears from scraps I had left and added them to the papers on the N and the E and the L. I finished off with strips from the sticker sheet for the front, back, and edges of the plinth.
Posted by Lucy Edmondson at 07:00 8 comments: 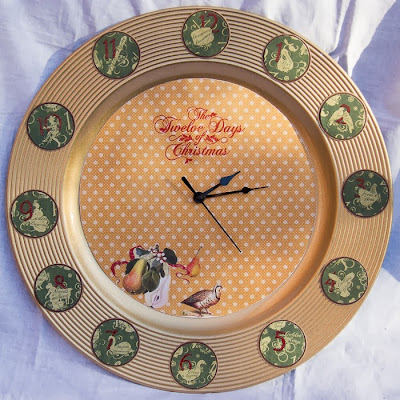 The Twelve Days made me think of points on a clock, so I bought a clock from the pound shop to take the mechanism out, and one of their gold charger plates, the sort of thing you have under a dinner plate at Christmas dinner. For the numbers around the edge I used the Pear Tree paper from the 8 x 8 pad and a 1 inch circle die and cut each of the 12 including the icon which accompanies it, e.g. 4 Calling Birds. This was the most fiddly part of the project but I managed to only use one sheet! I wanted the numbers to really stand out so I went over them with an embossing pen and used red embossing powder. I used the next size up circle die to cut a brown Core-dinations layer to go behind the numbers and sanded the edges, and glued the pieces into position on the plate. 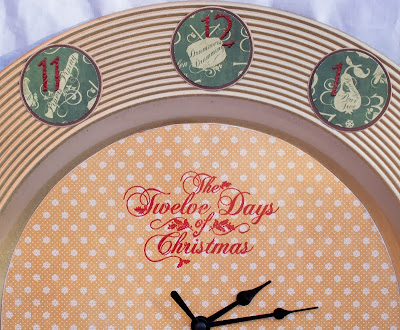 I decided I wanted the centre of the clock to be quite subtle so it wouldn't fight too much with the clock hands so I used the Golden Rings paper which is a soft gold pattern. I drew round a tea plate then cut it out and sanded the edges. I embossed the 'Twelve Days of Christmas' text from the stamp set No 1 in red, top centre. I then fussy cut the partridge and the pears from the Turtle Doves paper and adhered these at the bottom centre and added a very light touch of glitter. 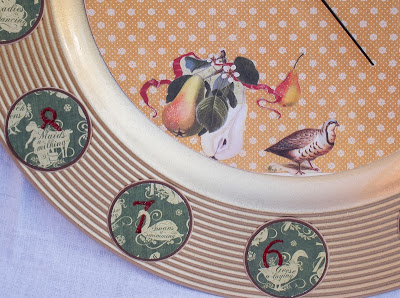 I had to make a hole in the plate for the clock mechanism and I was worried about shattering the plate! I actually went into the garage and got the workmate and the soldering iron out! For those who know me, this is very out of character! But actually it was incredibly easy so I would recommend it.

The stamp set I have is No 1, with the song words, but it looks as if No 2 would work brilliantly for this project if you get that set instead as you could stamp the numbers instead of using the circles of the paper with the numbers and icons on. If you had a smaller clock face, you could stamp them on shrink plastic. Either way, I feel this would make a practical present for someone who likes to bring their Christmas decorations out every year.

I'll be back later on this week with another project using this kit.
Posted by Lucy Edmondson at 07:00 9 comments:

I'm back today to share my second design team project with the Graphic 45 Twelve Days of Christmas collection.

Here is a Tando Triple Arched Layered Frame that I altered using the Twelve Days of Christmas papers: 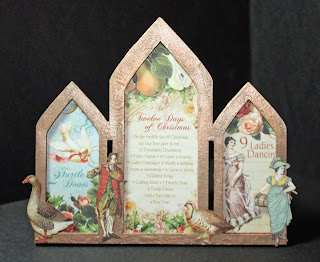 I started by painting the frames using Paperartsy Fresco paint in Tinned Peas.  I then gave the top frame a coat of their Crackle Glaze, let that dry then added Fresco French Roast and Irish Cream and let the paint crack. 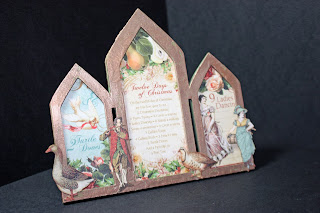 I cut sections from the Graphic 45 Twelve Days of Christmas 8x8 pad to fit the three frames and added them using multi medium. I stuck the layered frames together and finished off the sides and back of the frame with Treasure Gold Renaissance gilding wax.
I then added Treasure Gold gilding wax in Renaissance and White Fire to the front Tando frame with my finger to give it that really luxurious finish.

I fussy cut the partridge, goose, piper and maid from the same 8x8 paper pad.
To finish I added the fussy cut images to the frame along the front.

Thanks for joining me at Snazzy's this week - make sure you pop back next week to see the what Lucy has been up to with the kit!

Email ThisBlogThis!Share to TwitterShare to FacebookShare to Pinterest
Labels: 12 days of Christmas, Claire

I chose to alter a couple of baubles for my first project this week: 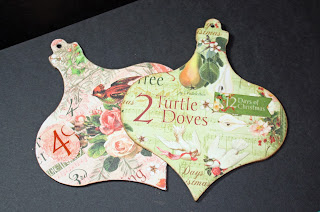 They started out as grey chipboard shapes: 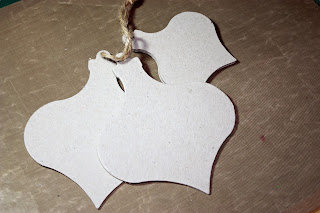 I covered one bauble with a section of the page for 'Two Turtle Doves'  I sanded around the edges after sticking the page to the bauble to create a nice smooth finish.  I added one of matching banners that come in this collection to the bauble and covered it with glossy accents. 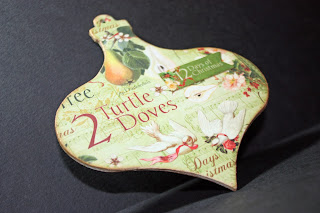 The second bauble was covered with paper from the 'Four Calling Birds' pages - again the edges were sanded for a nice finish.  I die cut the '4' from elsewhere on the pages and also the text 'four calling birds'  The oval with the number 4 on was treated with the glossy accents for a nice shiny surface also. I did paint the reverse of the baubles also just in case they spin around the wrong way when I actually get my tree put up!

I hope you enjoyed my first Snazzy project, I'll be back again later in the week with another project to share with you all.

Thanks for stopping by today,